Unit Tests, How to Write Testable Code and Why it Matters

Unit testing is an essential instrument in the toolbox of any serious software developer. However, it can sometimes be quite difficult to write a good unit test for a particular piece of code. Having difficulty testing their own or someone else’s code, developers often think that their struggles are caused by a lack of some fundamental testing knowledge or secret unit testing techniques.

In this article, I would like to show that unit tests are quite easy; the real problems that complicate unit testing, and introduce expensive complexity, are a result of poorly-designed, untestable code. We will discuss what makes code hard to test, which anti-patterns and bad practices we should avoid to improve testability, and what other benefits we can achieve by writing testable code. We will see that writing testable code is not just about making testing less troublesome, but about making the code itself more robust, and easier to maintain.

What is Unit Testing?

Essentially, a unit test is a method that instantiates a small portion of our application and verifies its behavior independently from other parts. A typical unit test contains 3 phases: First, it initializes a small piece of an application it wants to test (also known as the system under test, or SUT), then it applies some stimulus to the system under test (usually by calling a method on it), and finally, it observes the resulting behavior. If the observed behavior is consistent with the expectations, the unit test passes, otherwise, it fails, indicating that there is a problem somewhere in the system under test. These three unit test phases are also known as Arrange, Act and Assert, or simply AAA.

A unit test can verify different behavioral aspects of the system under test, but most likely it will fall into one of the following two categories: state-based or interaction-based. Verifying that the system under test produces correct results, or that its resulting state is correct, is called state-based unit testing, while verifying that it properly invokes certain methods is called interaction-based unit testing.

As a metaphor for a proper unit test, imagine a mad scientist who wants to build some supernatural chimera, with frog legs, octopus tentacles, bird wings, and a dog’s head. (This metaphor is pretty close to what programmers actually do at work). How would that scientist make sure that every part (or unit) he picked actually works? Well, he can take, let’s say, a single frog’s leg, apply an electrical stimulus to it, and check for proper muscle contraction. What he is doing is essentially the same Arrange-Act-Assert steps of the unit test; the only difference is that, in this case, unit refers to a physical object, not to an abstract object we build our programs from. 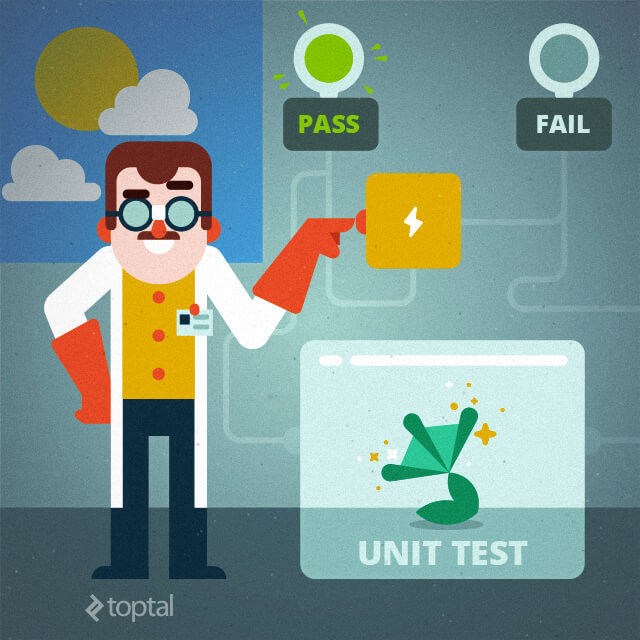 I will use C# for all examples in this article, but the concepts described apply to all object-oriented programming languages.